In the southern part of the Province of Namur, a stone’s throw from the new motorway linking the district between the Sambre and the Meuse with the Département of the Ardennes, Neptune's Caves invite visitors to go on an underground journey in two parts. 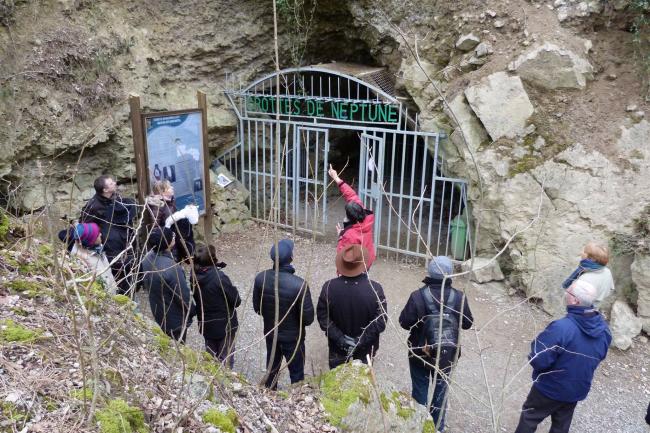 On foot for the upper part, exploring the underground world and learning about karstic phenomena, how stalagmites and stalactites are formed and how water flows underground; then in a boat for the second part, experiencing an impressive son-et-lumière show with music by Vangelis.

Back above ground “on the roof of the caves” visitors can follow the “senses mountain” trail through a Natura 2000 reserve at the heart of the Calestienne limestone area. The 1,500m trail stimulates the five senses through activities and explanatory panels that help visitors learn about this extraordinary ecosystem’s flora, fauna, forest scents and rocks. Plus, above all, a magnificent viewpoint overlooking the Eau Noire river.

The 1,500m trail stimulates the five senses through activities and explanatory panels that help visitors learn about this extraordinary ecosystem’s flora, fauna, forest scents and rocks.

This is the story of when a passionate man met an old building dating back to 1816. At that time, Tromcourt windmill was being used to produce flour and was part of the neighbouring brewery.

Fernand Platbrood purchased the windmill in 2014, to save the heritage building and to develop it as a tourist attraction. But his friend Jacques de Meeus suggested they formed a partnership to start producing flour again.

Major restoration works began in 2017, assisted by the “Compagnons du devoir de Troyes”, who worked on the walls, roof, floors, machinery, cap and sails. The restored windmill reopened in 2019.

Today, visitors come from far and wide to observe a working windmill, to understand how the machinery works and to buy certified organic wheat and spelt flour. Whenever possible, local organic grain is used, creating a low food-mile circuit because the mill works with the Keymolen bakery to recreate traditional bread, the sort that takes time to make…