Its towns, scrubland and forests are full of the scars of bitter conflicts, experienced by our ancestors and by yours too. In addition to hundreds of small sites with moving, sometimes surprising stories, explore the iconic remembrance sites of this cross-border region, each of which has seen crowds of soldiers, veterans, mothers and wives come to pay their respects to those who gave part or all of their lives to ensure our freedom of thought and expression.

For more information, please visit www.landofmemory.eu. Land of Memory is a cross-border project covering the Ardennes that aims to share these countless, precious memories with you, and to assist remembrance tourism visitors to ensure their legacy endures. 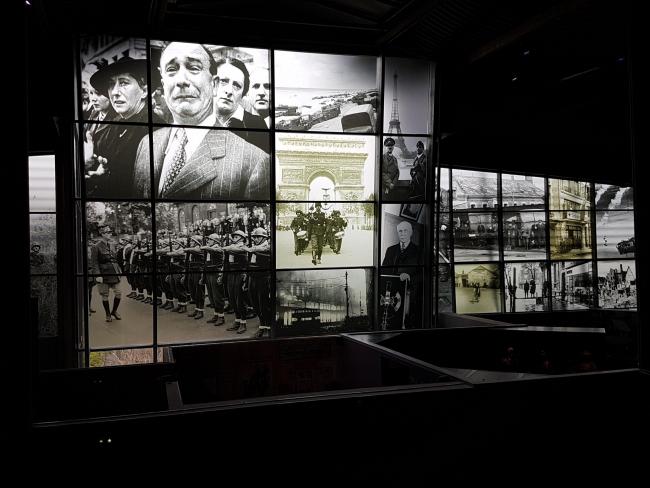 Set amid verdant countryside, this huge, airy building's particular aim is to explain the links between three wars: the Franco-Prussian War of 1807-1871, the First World War of 1914-1918 and the Second World War of 1939-1945, and the similarities in their effects on the Ardennes. Allow yourself to be plunged back into wartime by the diverse range of testimonies and 14,000 exhibits here. A real treasure, dedicated to maintaining the memory of territorial preoccupations that remain relevant today.

Eben-Emael Fort, the giant among forts

The Eben-Emael Fort was one of four new forts built in the inter-war years (1918-39) to reinfoce the Liège Fortified Position (PFL), an impressive ring of twelve forts, which had protected Liège in the First World War. Many of these forts can be visited today. This was the largest fort and called "a giant among forts" on its completion, when it was widely considered to be impregnable. Unfortunately this proved not to be true, as it was seized in a few hours in a daring raid by German paratroopers on 10 May 1940, marking the start of the German invasion of Belgium in the Second World War. Re-live this slice of history over three floors as you explore its underground tunnels, its living quarters, its gun turrets, its 17 reinforced bunkers and many other features. 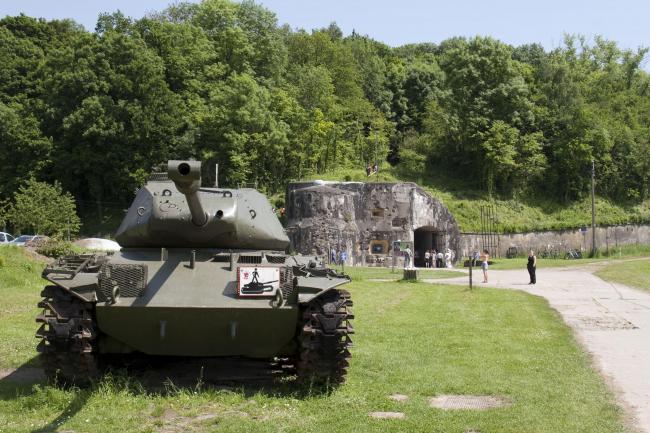 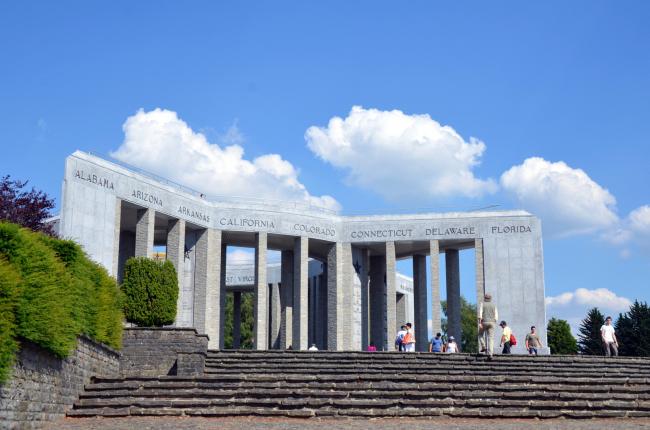 Specifically dedicated to the many victims of the Battle of the Ardennes in the winter of 1944-1945 (also known as the Battle of the Bulge), this museum offers a very immersive and interactive experience using modern exhibition techniques. Above all, it evokes the experiences of individuals through accounts told by four characters and collective history through many original sources. The building is located a stone's throw from the impressive war memorial at Mardasson, built to honour the American servicemen who died in the battle. Climb the spiral staircases inside the memorial to to admire the breathtaking panorama from the viewing platform, with explanations of the different fronts. Nobody who walks through the memorial's columns remains unmoved by the experience.

Battle of the Ardennes Museum and tour of Clervaux

Located in the middle of the charming town of Clervaux, the Battle of the Ardennes Museum is housed in a no less charming chateau. There are no princes here, just heros. Known and unknown soldiers rub shoulders to proudly evoke the fighting during the terrible winter of 1944-1945 (also known as the Battle of the Bulge). The experienced museum guides have also taken pleasure in developing a complementary tour of the town that will satisfy even the most curious visitors. Here and there, your route is intercut with moments of laughter and fear, as the guides share with you the anecdotes that combine to create the bigger story. 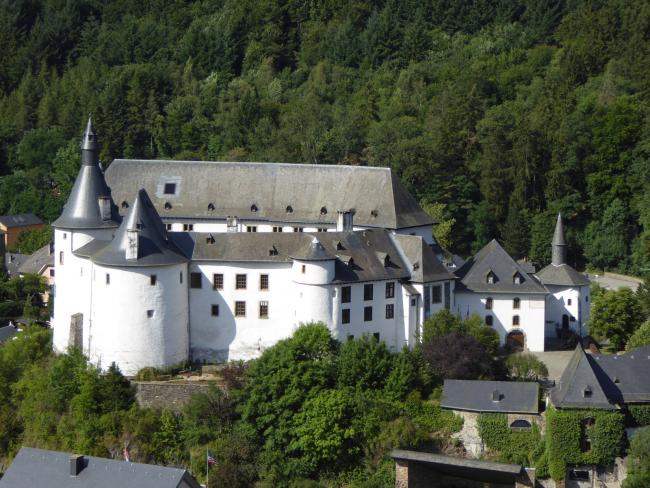 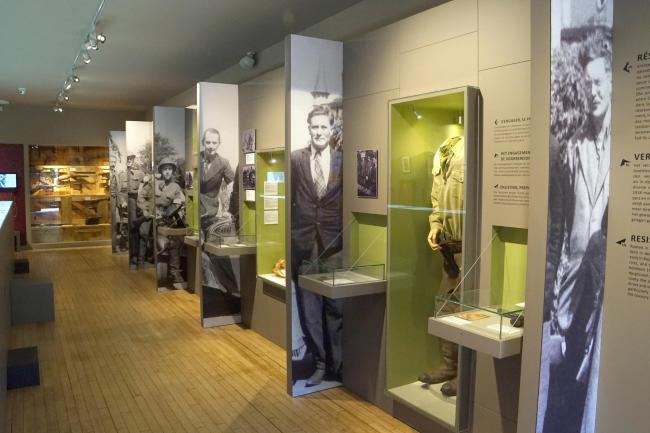 Hitler chose the wooded hamlet of Brûly-de-Pesche, in the "Wolf's Ravine" as the location for his bunker, where he elaborated his strategies, wrote some of his most horrific speeches and followed in detail events on the nearby front. While an exhibition gives admirable details of the life of local civilians under the occupation and of the local resistance movement, you really must walk as far as the bunker itself. Accompanied by passionate guides, you will learn about the technical and psychological aspects of Hitler's command system, but you will also sense a sort of electricity that still haunts the place. Located on the French frontier in a clearing in the woods, come and immerse yourself in the unique and highly charged atmosphere of this place and see how much history weighed on the shoulders of  a single man.

The "martyr villages" of Rossignol, Bellefontaine and their blood brothers

Ethe, Anloy, Rossignol, Neufchâteau, Bertrix, Maissin, Virton and Bellefontaine are the names of some of the pretty villages that were murdered and marked with stigmata by the Great War. The use of the present tense is not without meaning: here people remember and the memorials bear witness. Follow in the footsteps of those civilians who gave everything and from whom everything: their lives and families, was stolen. 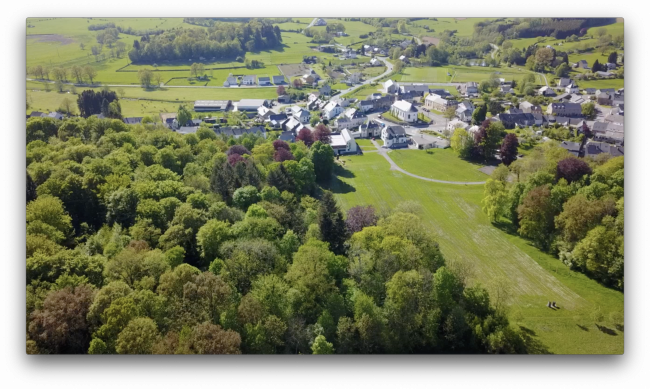 However, for the German army, the counter-offensive's objective was to advance much further than Bastogne. In the end, encircled by the US army at La Gleize, the last 800 soldiers of Peiper's army fled the battlefield before dawn on Chirstmas Day 1944, leaving behind many wounded comrades and armoured vehicles. For this reason, it is this defeat that is most remembered in the region today as marking the defeat of the Nazis.

Anecdote  Peiper's army abandoned 135 armoured vehicles around the village of La Gleize alone. After the war had ended, the Americans were transporting all the military hardware from the two German camps to be melted down in the blast furnaces of Liège. However, when an American military transporter was preparing to leave the village with a Tiger 213 tank on board, the wife off the village innkeeper, Mrs Jenny Geenen-Dewez, persuaded the American soldiers to unload it and leave it behind by offering them a bottle of Cognac! Today the same tank can be admired by visitors in front of the museum.

Offering historical aerial views of the Ardennes, the Spitfire Museum is where history and reality meet. It is one of the historical military airfields still in operation as an air force base, which gives visitors and added frisson of excitement. If you'd like to visit, please note that you have to apply for permission to enter the base, which may take some time, but adds a lot to the realism of the place! The museum is a real must-see and its history is closely linked to that of Colonel Raymond Lallemant, DFC and Bar, a Belgian Air Force pilot who joined the Royal Air Force in England and became a fighter ace during the Second World War,and the first Commandant of the 2nd Florennes Squadron of the Belgian Air Force after the war. Covering an area of more than 1,500m², the museum gives visitors the opportunity to admire aircraft that made huge contributions to their eras, for example a 1944 Mark-14 Spitfire, an F-84, a Mirage and an F-16, as well as fascinating personal items belonging to this airman dating from 1943 to the present. 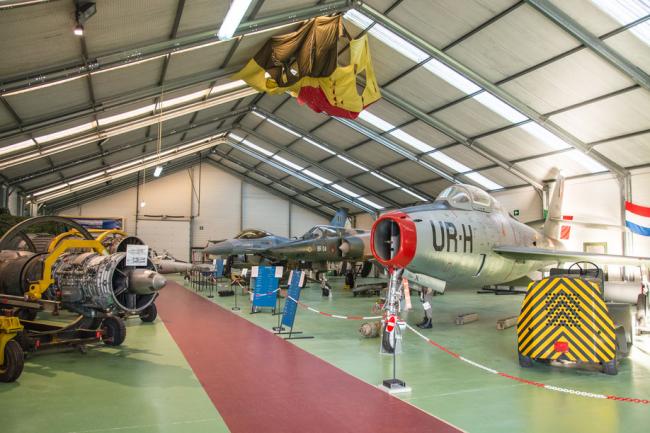 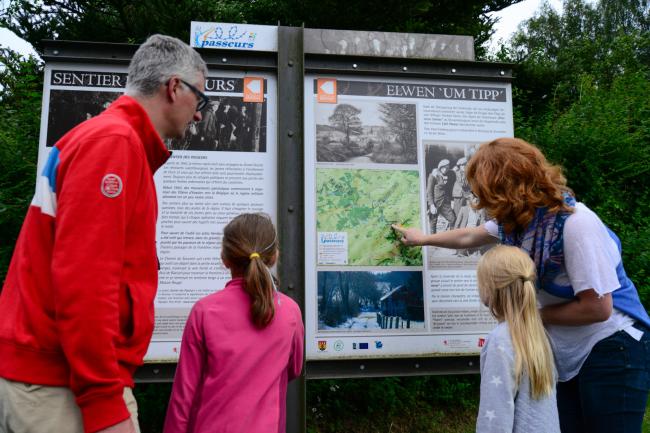 Follow this 12km trail in the footsteps of people-smugglers and the people whose lives they saved by risking their own in smuggling them across the frontier. Between Belgium and Luxembourg intensely humanitarian and fascinating stories await you, bearing witness to the experiences of the people who lived in this cross-border region during the Second World War.

The Ouvrage de La Ferté is a fortress where a real sense of civic duty is will always resonate. Have you heard of the Maginot line? You probably remember it from your history textbook at school, but have you ever seen and touched what remains of it? The Ouvrage de La Ferté is part of this fortified defensive line, and one of its best-preserved and most interesting installations. But in any case, a visit allows you to smell, see, touch and hear its echoing sounds, read about its hopes and fears and the love of its garrison of soldiers for their comrades in arms and their families so far away. In short, it offers a glimpse of the daily lives of these infantry soldiers who were, above all, men, husbands and fathers. If this visit sparks your interest, why not continue to the battlefield at Sedan where memorial trails have been laid out for you to follow in the footsteps of soldiers of yesteryear? 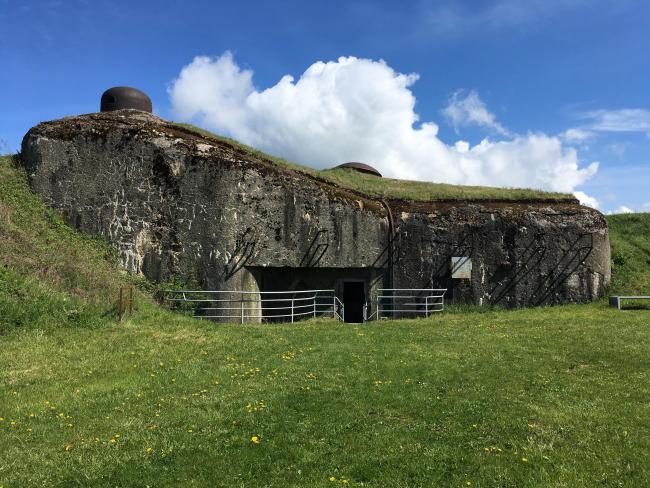 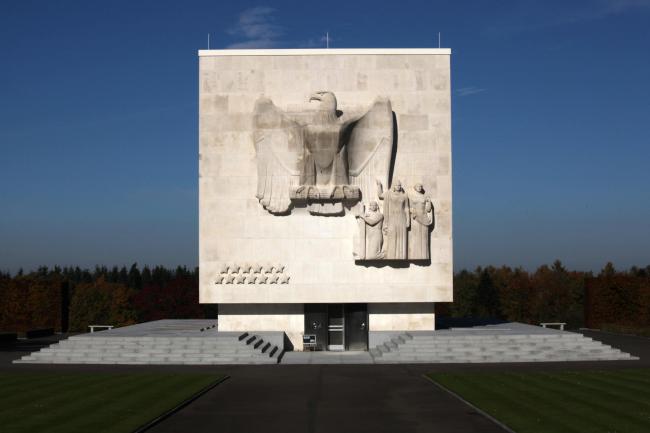 When you arrive here, everything looks straightforward… the gigantic, majestic American eagle is a forceful reminder of the sacrifices made by those young men and women who crossed the Atlantic to liberate strangers. As you advance, step by step through the graves, you notice the names, the thousands of names. Then one in particular catches your eye: why is there a German name in an American military cemetery? The name is that of Kurt Gruber, who served in the US Army as a member of the secret TOOLS mission. He was a German anti-Nazi who was sent back to his homeland to go undercover among the civilian population and gather intelligence, at enormous personal risk. People like him are often forgotton, but not here. And this place is more than a simple cemetery and memorial because it remains the centre for identifying and reburying the bodies of American servicemen and women discovered all over Europe. Just imagine...

In 1944, La Roche was a small, peaceful town in the Ardennes. On 26 December it was bombed by the allied air force and 90% of it was destroyed. 114 people from La Roche lost their lives. In this museum, run with passion by Gilles and the Bouillon family, you will discover more about this dramatic episode. Through different scenes showing about a hundred American, English, German, Belgian and even Scottish soldiers with their equipment and weapons, you learn more about the Battle of the Bulge. What makes this museum so special is the quality of the exhibits and especially the "weapons room" where more than 90 rifles, pistols and revolvers are on display as well as the legendary Enigma decoding machine. The Museum also highlights the role played by the British in the liberation of the villages on the left bank of the Ourthe between 3 and 16 January 1945. 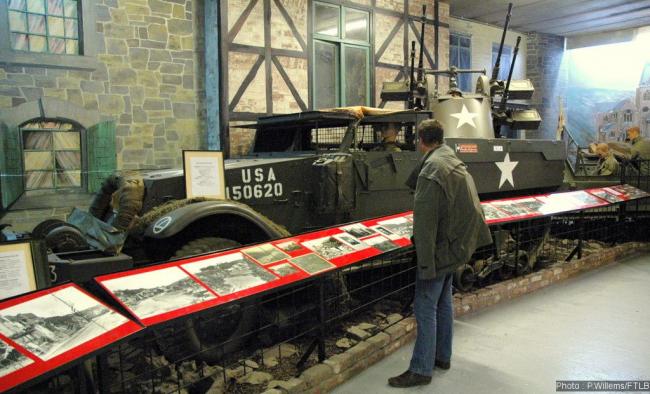 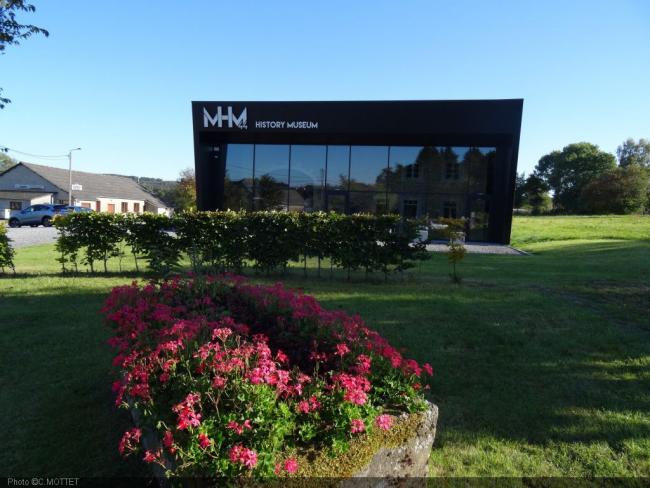 Manhay History 44 Museum, Museum of the battle between German and American tanks, where the 2nd SS Panzer Division was stopped

From 23 December 1944 to the early days of January 1945, Manhay and the surrounding villages were the scene of one of the most unusual tank battles of the Second World War. After taking the crossroads of Baraque de Fraiture, despite fierce resistance from the men and Major Parker's three guns, the armoured vehicles of the notorious 2. SS-Panzer-Division "Das Reich" were ambushed by American tanks. In this brand new museum, built next to a mighty German Panzer tank, you can dive into the heart of history thanks to a high-quality scenography. But above all thanks to the welcome you will receive from the owner, who will touch you with facts, stories and objects on display. These objects were given by local inhabitants, but sometimes also by American or German veterans who took part in the battle.

Tourism in the service of remembrance, but also at your service to help you remember, of course!

To find out more about the Land of Memory project and to explore more remembrance sites in the Ardennes, please visit: www.landofmemory.eu.
To receive tailor-made advice and to create an itinerary for your school group, group of friends or colleagues, please get in touch with the groups service at: groups@landofmemory.eu. You can get an idea of the emotions that await you at www.groupes-landofmemory.eu. 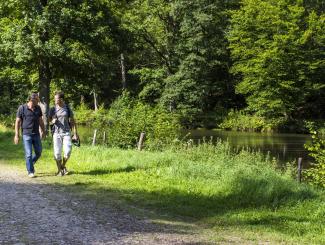 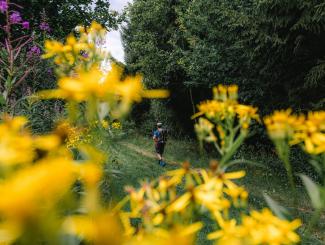 Multi-day hiking trails in the Ardennes 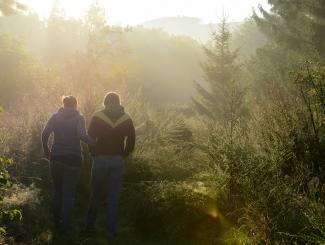 Walks of less than 10km in the Ardennes