A donkey in the Ardennes

Fancy hiring a donkey? You can from Emmanuel Crametz!. For rides around the village or for treks in the Thiérache district, on the pre-Ardennes ridges, or in the Meuse valley. It's a perfect timeless family experience… Emmanuel's skill is in organising the route, selecting accommodation and camping sites in a coherent manner, in sympathy with nature. A family spirit, welcome and quality, authentic products. 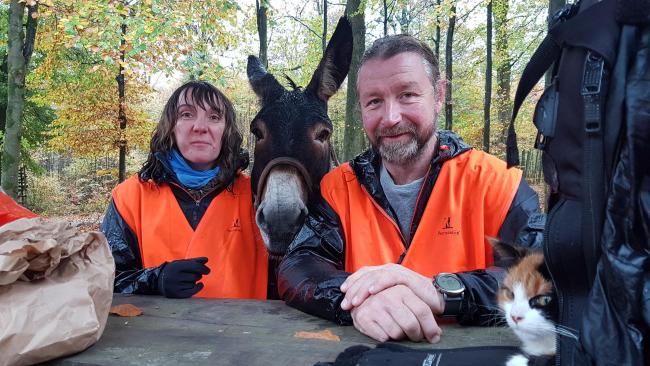 He also loves sharing his knowledge about donkeys… Affectionate, mischievous, timid… each has its own character. At village fairs his donkeys sometimes take adults and children for carriage rides. Lovely!

On the banks of the River Malaquise, Emmanuel has created the "cab’âne", a chalet-gîte lit by an oil lamp, with an old-fashioned kitchen and a wood-burning stove. You can while away your time playing board games, going on walks or sitting around a camp fire. Or you can simply just do nothing… Disconnect and recharge your batteries.

Experience a timeless adventure with your family…

Emmanuel Crametz discovered Le Moulin à Couleurs at Ecordal when he was looking for a way of replacing the original wood-stain varnish on his "cab’âne". When a friend told him about their natural pigments, he decided to pay them a visit to see them first-hand. He was not disappointed: he was warmly welcomed, received expert advice and left with his pigments. Then he just had to mix them with flour, water and linseed oil to make a varnish that is much easier to apply than commercial wood-stain varnish, three times less expensive and with a much nicer smell! He was converted!

Established in 1866, Le Moulin à Couleurs is the last remaining manufacturer of earth-based pigments in France. Its range covers almost 80 pigments, of which 45 are natural, including Burgundy ochres and Ardennes sienna. Its pigments are in high demand by restorers of ancient buildings, among others.a restauration du patrimoine ancien, entre autres.