My family became a prehistoric tribe at the Préhistomuseum 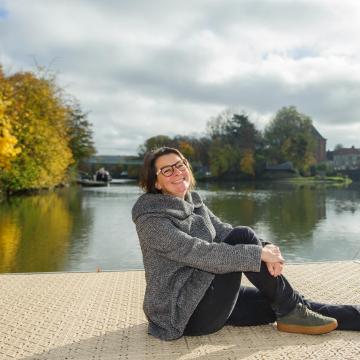 Alone or with my family

Simplicity is the key

We're enchanted and want to go back to try everything we couldn't fit it (...). Another dream waiting to be fulfilled.

The pleasure of hands-on learning

Discover ancient practices at the Préhistomuseum

"Transform your family into a prehistoric tribe for the day!" The promise of the Préhistomuseum at Flémalle appealed very much to the children but left me a little worried. I imagined them barefoot, covered in mud and screaming in a dark cave, gnawing on bones, shooting arrows at every passing animal and finishing their day transformed into wild animals... But in fact I was amazed by their healthy curiosity and their ability to concentrate. And it wasn't that tough on the washing machine after all.

Archaeo-activity leaders to stimulate the imagination

A warm and friendly welcome, availability, attentiveness, interaction, generosity and kindness... the Préhistomuseum has the perfect recipe for getting young children interested in topics that we might not expect them to care about. Think about it: three kids aged 4, 6 and 8, registered for a workshop on "how to build a neolithic house". Unless they're already dreaming of becoming architects, you'd be forgiven for thinking they wouldn't like it. But only until you've seen Céline in action. She's an archaeologist and an outstanding activity leader! This Préhistomuseum has found the perfect formula. It proposes not only some fabulous knowledge-sharing features (visitors enter a 16 x 5.8-metre reconstruction of a prehistoric house), but also activity leaders who really know how to captivate their audience. At the reception desk, Marie is in charge of helping visitors put their programme together. She suggests this workshop without hesitation, as well as the mammoth hunt, despite the fact that this seems to appeal more to the young children than to the adult visitors.

Any good surfer can hunt on the glacial steppes

In fact, that's how we began our first tribal experience: hunting with a spear-thrower. This tool projects the weapon much faster and much further than a normal spear, thus allowing hunters to keep a safe distance from their prey. Before letting us go hunting, Marie gives us a few ethnographical explanations and a word of advice: "feet apart and legs flexed: anyone who's good at ball games or surfing will make a good hunter." At last, we leave for the glacial steppes, observing typical dwellings and a herd of goats before reaching the hunting ground. Enthusiasm reigns among the children who are spoilt for choice in their first target practice: a prehistoric rhinoceros, an arctic fox, a horse... or the famous mammoth! Guess which target they chose? A wonderful experience and a chance to let off steam. Louis's gran, who came with us - you'll remember her from the Stoumont golfing adventure - proved that hunting is not just for the men!

The best hunter was Gran! 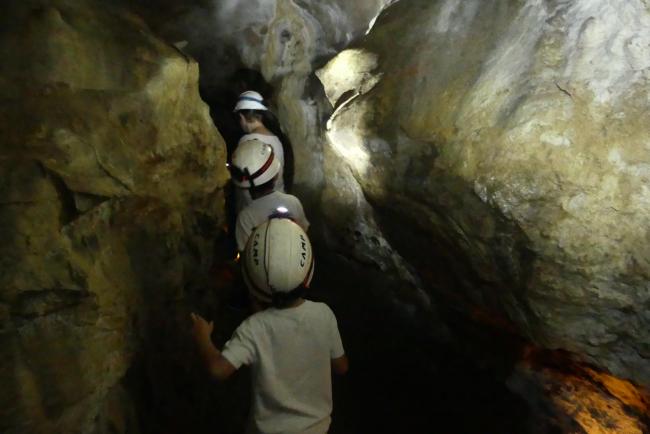 Sent back to the Paleolithic era

Before our next activity, we take the time to enjoy wandering in this 30-hectare Natura 2000 area. It's a real peace haven and ideal for such time travel. Armed with a map (also available within children's reach at the entrance), we easily find our way around thanks to the huge red letters dotted along the trail. We discover the prehistoric farm which is home to a few rustic breeds: aurochs, sheep, goats and a famous pig named Carlos, who even has a prehistoric smell. Annie marvels at the gardens: "Look, just like the bales of straw from my childhood!"

In the beginning there was a cave

It's midday and 4-year-old Samuel is living a dream come true! We're to meet at the cave, an emblematic part of the museum. Here, in 1917, some children discovered prehistoric objects, a small tomb and some animal skeletons. Around that focal point, this fascinating open-air museum emerged to share with us a wonderful mix of knowledge and know-how. We're greeted by Alice who instantly adds an element of fun to our adventure: off we go, donning helmets equipped with torches. Although this cave was the first to be fitted with lighting in the 1920s, it was also the first to be plunged back into darkness, partly for conservational reasons, but also to enhance the visitor experience. We embark on a 100-metre underground walk surrounded by rocks and beautiful crystallizations. Samuel, who's normally scared of the dark, enjoys himself but doesn't hang around for long when his imagination is sparked by certain details. When we leave the cave, he wants to go straight back in! But it's time for lunch.

The bewitching magic of fire

We haven't brought a picnic so we have lunch at the Préhistomuseum restaurant. Before continuing our adventure, the children have fun at the lovely play area. Eventually, we head for the famous Neolithic construction workshop, praying our three crazy children will keep quiet... It takes just a few minutes to calm them down. They listen to Céline's every word, dig holes with prehistoric spades, and try to erect a 3-metre post. Heave-ho! "Don't even try, it's a difficult task for 30 adults, let alone 4 children." So they build a wall of woven branches instead, but without the mud to use as cob, fortunately! The excitement builds and reaches its peak with the enchanting ceremony of fire! The children are captivated and burst with joy at the sight of the flames. Well done Céline!

It's already time to meet Alice for the last workshop. Once again, the family gets to join in, discovering how to choose the right tools to work the land, grind corn between two stones and make prehistoric plates! With lampblack on the nose and hands covered in green clay, we decorate our creations with a whole array of instruments. We finish by adding our signature, "not exactly prehistorical" according to Alice. The day's thrilling family experience draws to an end! I've been amazed by my children's ability to concentrate, even on themes that appeared more complex and we've all had a really great time. We're enchanted and want to go back to try everything we couldn't fit it! Another dream waiting to be fulfilled. 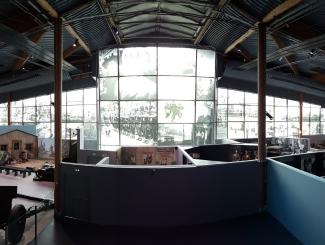 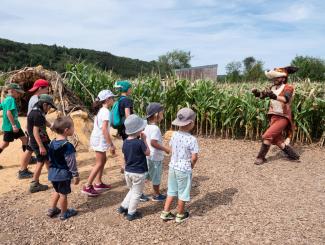 I WANDERED THROUGH THE Barvaux MAZE, BETWEEN CHALLENGES AND SUrprises 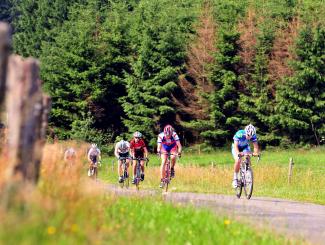 I cycled the route of the Liège-Bastogne-Liège race